Before I had my baby boy, I was a champion sleeper. I could sleep in until noon routinely on weekends (if my husband would let me). I could take a nap anytime. I never woke up in the middle of the night. I could go to bed early. I could go to bed late. Sleep was a sweet sweet joy which I could always rely upon.

Cue Baby Boy arrival. Of course there were the requisite sleepless nights spend nursing and holding a newborn. I was so exhausted during the day, too, that I could hardly function. I napped every chance I could get. I was still a champion sleeper, just not getting enough of it.

After awhile, some of the newborn fog lifted, and he was sleeping longer stretches through the night. However, I would often continue to wake up at the usual times, like clockwork, and then be unable to get back to sleep. Or, I would wake up and feed him in his one or two remaining night feeds, browse my Instagram and Facebook, then lie in bed wide awake unable to get back to sleep. Nothing was worse than lying in bed, watching the time go by, knowing that the baby was going to wake again in X amount of time, and feeling eventually that “well, it’s pointless to sleep now, I’m just going to be up again in half an hour anyways.” Or actually, even worse was the feeling of “oh look, the room is lightening, the sun is rising, my baby is finally sleeping peacefully and why haven’t I slept!?”

Daytime sleep did not fare much better. Despite being up half the night unable to fall asleep, often I was also unable to nap, even if someone else was taking care of the baby (thanks, dear hubby). The slightest noise in the house would wake me, like typing on the computer downstairs, or the sound of the musical mobile. Any little cry and I would instantly be awake. When he was going through his 4-month sleep regression, he would never nap longer than 45 minutes at a stretch, which meant that I would lie in my bed trying to nap, be unable to sleep after 20 minutes, then say to myself, well what the heck I’m going to be awake again in 25 minutes so what’s the point?

This was starting to become a major problem and affecting the quality of my life. Sleep, my sweet pleasure, why do you elude me now? I tried a few tips and yes, products, to help alleviate my insomnia.

I turned on phone wind-down mode.

After a few nights where insomnia struck after middle-of-the-night Facebook browsing or novel-reading, I had to discipline myself NOT to look at my phone while nursing at night, at all costs. The goal was to try not to wake all the way up if possible. To do this, I had to remove all temptation by turning on my phone’s “wind-down” mode, which is a setting all Android phones have. Between the hours of 10pm and 7am, I set my phone to show me no notifications, either on the home/lock screen or at the status bar at the top. I did not need to know about email and be tempted to check it at 2am and then spend the next 3 hours thinking about work. Also, no buzzing or beeping to disturb my sleep during those hours, either. The screen turned a nice yellow so as not to hurt my eyes when I did need to look at it to time my nursing feed or use my baby monitor app (Nanit Plus, reviewed here). Not looking at my phone in the middle of the night helped me immensely in quickly and efficiently getting back to sleep after nursing, just like my baby did.

I got a weighted blanket.

Seriously, this was life changing. I had heard about weighted blankets before but having never had sleep problems, didn’t bother to try it. But after I got my 20 lb weighted blanket, I slept so much better. I fell asleep faster. I slept more deeply. I was roused less easily. It felt like a nice hug or snuggle. I wanted one that looked good and matched my decor, so I went with the Napper from Bearaby. I loved the chunky knitted look, the plus side of whih meant that the weight was always 100% evenly distributed.

I got a sleep mask.

I never liked sleep masks before, because I felt like they were always slipping off, putting pressure on my eyes, or not very effective. Then I got one that was comfortable, stayed put, and was very good at blocking out all the light. This was very key for blocking out that 5am light that started filtering in, so that I would not know what time it was and could sleep as long as possible in the morning.

Then I got earplugs, too.

Seriously, these earplugs were amazing. I used to not want to wear these either, because I felt earplugs were uncomfortable after awhile. These ones are on the smaller side, a good fit for my petite ear canals, and blocked out enough sound.

These are nice because they come with three of them (in case you lose one) and in a nice little secure metal case that you can clip to anything. I recently traveled on the plane with these too, and they were quite effective. I found them much more comfortable to wear and sleep with for long flights than my noise-cancelling earbuds, so as a result I actually wore these most of the time rather than my earbuds.

They were so helpful for naps for blocking out random household noise and baby mews that somebody else was taking care of, so I could finally get some much-deserved rest.

If all else fails, I turn on white noise, too.

Momsomnia sucks, but with all these measures (and also finally sleep training my baby), my sleep is much better now! I don’t think I’ll ever sleep like a champ again like I did before baby, but at least now I can manage better. 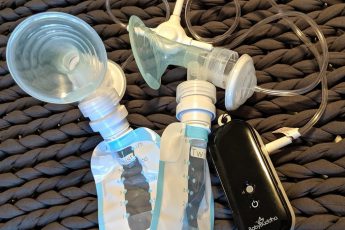 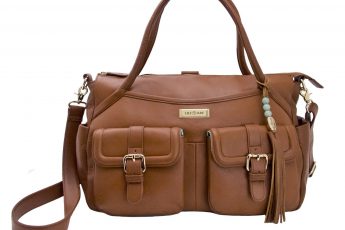 In search of the perfect work bag: Lily Jade Elizabeth review and why I returned it