December 9, 2020 by workingmama No Comments

So after eyeing Jemma’s new Jules bag, since it was released, I finally pulled the trigger over the Black Friday Sale. The Jules bag was designed to be equally good as a diaper bag and a work bag. Its killer feature is conversion from shoulder bag to backpack, all while looking extremely stylish. Here I’ll do an in-depth review of how it stacks up as a bag for a working mama.

There is no doubt that this bag could definitely pass muster as a work bag. The top flap with top handle is reminiscent of work briefcases, with a true dowel-top design. While it’s not as formal as the Jemma Emma 39, especially in the croc version that I got, for the majority of work settings except for the most formal, this bag would do just fine. I got the black and tan version, and I think the tan accents are a very nice touch. There is also a totally black version if that is your jam.

The body of this bag is made mostly of nylon, which Jemma advertises as being Italian-made, and water/weather/scratch-resistant. The nylon body makes the bag very lightweight and comfortable to carry. It is not the same nylon as the Jemma Jackie (and, presumably, Birdie) bags, which has more of a shiny finish. I must admit the smoother shinier nylon in the Jemma Jackie just feels more luxe to touch! I wonder why they changed it for the Jules? It could be that the Jules’ matte nylon is lighter or perhaps more scratch-resistant…or maybe it is just less expensive. Because of the nylon construction, the bag does have some wrinkles and is overall just a tad slouchy, especially if not totally full.

The straps and trim are advertised as being made of leather. On my version, it is a stiff tan leather with a saffiano imprint. Again, it is not the same as the tan leather trim on the Jackie or Birdie, which is smooth and vegan. To be honest though, if the Jules’ trim is genuine leather, I would not be able to to tell just from looking at it or feeling it. In addition, there are areas, especially on the shoulder strap, where the leather trim is a bit wrinkled.

Speaking of the shoulder strap, it is made of a very comfortable webbing with the aforementioned leather trim. It feels really good on the shoulder in both backpack mode and tote mode.

The killer feature is conversion from backpack to tote and back again. I think this is absolutely amazing, especially when you are carrying a heavy load or need to be hands-free, such as when running after babies or through an airport. The Jemma design follows the same principle as other convertible backpack-totes, similar to the Senreve Maestra and probably similar to their Poppins tote as well. The straps are attached at the bottom corners of the bag and feed through hardware anchors at the top. The straps can be thick and wrinkly, and there can be some resistance feeding them through the hardware anchors to do the conversion, but it’s not impossible. Another plus is that because of the way the shoulder strap handle is designed, there is absolutely no possibility of the strap “pulling through” on one side when putting the bag on or carrying it one shoulder, a frustration which I found was common with the Maestra.

The interior is plenty organized for me, including one large zip pockets, several open pockets, and a spacious laptop / changing pad compartment. For sure everything I need for work will fit, including lunch, a change of clothes, and any pump stuff. There is a funny-shaped leather pocket which I think is supposed to be a lipstick holder? I use it to hold a 2 oz spray bottle of hand sanitizer.

The laptop/changing pad compartment is plenty big, and will fit my Surface Book 15″ laptop perfectly. Because the Jules is slightly taller than the Emma 39, there isn’t that problem with the laptop sticking up too far out of the pocket. When the pocket is empty, it does flop open quite a bit since there’s no closure to it. I can use it as a bag divider and store some smaller loose items in the pocket.

There are also two side pockets on the outside which are insulated. However, because of the shape of the bag, the top opening of these pockets is very small. I don’t think I could fit my own water bottle into these pockets, and certainly not if there’s anything at all in the interior side pockets.

There is a back pocket which doubles as a pass-through luggage sleeve, similar to Jemma’s other bags. The bottom zip is a nice reinforce waterproof zip. In side the open top back pocket is another nested slip pocket which is made of a soft furry fabric, presumably for stowing the phone safely. It is a large-ish pocket which is good for large phones, but it’s kind of floppy meaning it’s not always easy to actually get the phone into the pocket.

The Jules comes with several accessories, including the aforementioned laptop sleeve / changing pad, two straps for hooking up to a stroller handle, and an insulated lunch/bottle pouch. I would say that all of these accessories are nice to include, but in execution they are just okay.

The insulated bottle pouch looks decent and certainly has the advantage of matching the bag. The saffiano trim on it I found to be a bit wrinkled and the top was warped/misshapen. It does fit in perfectly with the bag, and takes up over half of the bag’s open space. Because of its tall and narrow design, it would probably be best for bottles or milk bags. If you wanted to carry your actual lunch in it, most lunch containers would be too big to fit into it except sideways/vertically, which would cause all your food to fall down into one side of the container, and perhaps cause it to leak. I’ll probably be using my own lunch container that will allow me to store my tupperware in the bottom of the bag in the proper orientation. Also, a minor nitpick but I wish the top of the container didn’t say Jemma, but had a logo instead. My colleagues are going to wonder who Jemma is and why she has a monogrammed lunch bag in the fridge.

The laptop sleeve/changing pad is a brilliant 2-in-1 idea, but again marred by details of execution. It has two side zips that can be undone to open it totally flat, usable as a changing pad. Unfortunately, the two side zips are of poor quality, and unzip if you even so much as look at them. Also, one of mine already broke / got misaligned and required some adjustment to try to get the teeth to come together again. As a changing pad, it is nicely padded, but the lining is the same cotton as the main bag, and it is not wipeable at all, which I think is rather impractical. I suppose you could always use it with the black/nylon side up? But the white lining would still get dirty from whatever surface you put it on.

My laptop does fit nicely into it as a sleeve. There’s no closure for the flap though – an unobtrusive magnetic closure to keep the flap folded up would have been nice. In all though, I think the laptop sleeve in the bag is padded enough for me to put my laptop into it directly, and I probably won’t be using this sleeve much on its own as a laptop sleeve, partly because of those pesky side zips.

Finally, it comes with a pair of straps that allow you to hang the bag from a stroller handle. The straps are made of the same sturdy webbing as the shoulder strap, with the same leather trim. They come with two nice heavy-duty carabiner attachments. Curiously though, the stroller straps “loops” are permanently sewn closed. I would have thought that there would be some velcro to open the loops and get them over the handle of the stroller. Instead, you just have to loop it through itself which I thought was a bit less elegant.

Although the Jules looks to be similar in size to the Emma 39, I think it feels slightly roomier inside, perhaps because it is a tad less structured. It is slightly taller, so my laptop fits into it much better.

The Jules looks and feels less luxe than the Emma, but then my Emma is all leather and croc-embossed to boot. In return, the Jules is a lighter weight bag and feels more comfortable to carry maybe because it’s “squishier.”

Unlike the Emma 39, the top handle on this bag is not suitable for shoulder carry, and because of the way the strap is made, the long shoulder strap is not very suitable for crossbody wear either. However, in return you get the awesome backpack functionality so that is a tradeoff I’m happy with.

The other direct competitor bag I had also been looking at was the Caraa diaper backpack, which was also on sale for black Friday.

It too can be worn as both backpack and tote, and can be tangled off of stroller handles. It is also made of a lightweight nylon type of material, and has a pass-through luggage sleeve on the back. However, I think it looks much less formal in design than the Jules. The Jules looks primarily like a tote, with backpack functionality, whereas the Caraa looks primarily like a backpack, with some tote functionality. Also, a dealbreaker for me was that the Caraa’s laptop sleeve will only fit machines up to 13″, so it wouldn’t fit my computer. It also doesn’t come with a changing pad, which may matter to some. Another thing to note is that the Caraa is completely vegan with no leather trim – though that does make it completely machine washable, which can be a plus. Caraa’s interior organization contains more large open pockets, which make it perhaps more suitable primarily as a diaper bag, with work being more of an afterthought. It’s $100 cheaper though, so that is not to be overlooked.

Despite a few details in the design which are less than luxe, overall I’m quite happy with the bag, particularly at the sale price that I got it for. I think it’s a really versatile bag that would do well as a work bag, as a diaper bag, and as a travel bag. I wouldn’t hesitate to bring it with me to work for all but the most formal occasions (interviews, maybe a courtroom?). Thus, unlike most dedicated diaper bags this bag would have a long lifespan of usefulness. I’m using it now as my everyday work bag, and I will reserve my fancier Emma 39 for more fancy occasions when I really want to look sharp (e.g., wearing a suit). I think the Jules is a tad overpriced for what it is – a mainly nylon bag. Because of the materials (underwhelming nylon and leather) and certain design flaws (poor zips), it doesn’t feel as luxurious as the price suggests it should. However, you would be hard pressed to find another bag out there that could play so many different roles, and all of them so well! 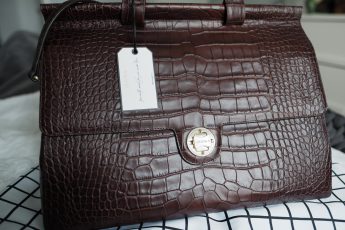 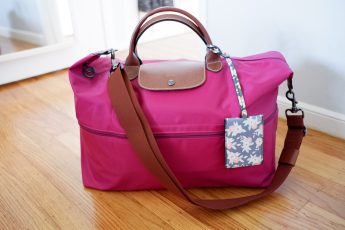 In search of the perfect work bag: long-haul flights while pumping, with the Longchamp Le Pliage Expandable Weekender

In search of the perfect work bag: Senreve Maestra review, and why it didn't work for me